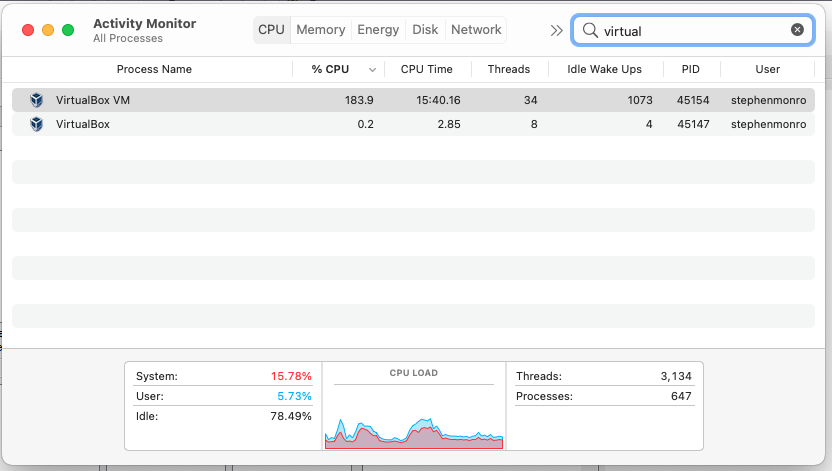 I’ve used both Fusion and VirtualBox extensively in the past, and after swapping over to VMWare Fusion Free Personal edition, I’ve discovered something quite interesting.

Using VirtualBox on my MacMini 2018 (3.2 GHz 6-Core Intel Core i7) with 64GB of RAM, I was finding it was producing a small amount of thermal throttling and can bring the temperature up to about 90 degrees celcius at times. While this isn’t super hot, it borders on what the MacMini likes, and so fans kick in.

My previous 4,1 MacPro used to handle the temperatures fine with no thermal throttling, however, this new MacMini performs better giving the higher CPU and SSD performance, and with lower power consumption.

However, the biggest thing is CPU usage when Windows is idle.

VirtualBox sits at about 180% CPU

Whereas VMWare sits around 60% CPU usage

A further update to this is that I’m actually seeing it sit on about 14% CPU usage, with it running audio software, and streaming to a shoutcast server. Very impressive. Running version 12.1.2.

The other big thing is that the sound works in VMWare Fusion, whereas I couldn’t get audio to work properly in VirtualBox on a Windows 10 VM with MacOS 11.2.3 as the host. This is the real game-changer.

One problem I do have is that Windows in VMWare won’t boot up with the Network device attached. I have to “Disconnect Network Adapter” before it boots, otherwise it hangs before the login screen.

The network is fine.

After my initial VM was loaded, I found that somehow it had become corrupted, and that Windows 10 simply wouldn’t boot – even after all of the windows boot fixes and restores I could find. Strangely, my data was still good and I was able to get it all back using EFSExplorer, which can read virtual drives. Seriously, if you have any virtual machines running critical data on them, it’s a must and a no-brainer.

Anyway, after a complete reinstall, instead of an import from a previous VBox image, I’ve had no issues at all – including that network problem earlier.

Like what you see and want to say thanks? Feel free to shout me a new t-shirt, mug, a house, or a just few bucks! Thanks in advance! -Steve (Blue Tomato Media)

Feel free to send me a few bitcoin satoshis if you like what you read.
1CT97sfZvBuCuphBPqvCfck3z4oj7aYeyi

Try out A2 Hosting. It's who I'm with, and they are much faster than GoDaddy, and their servers are always up. *Yes, this is a link to earn me money.

Have a look at my site. Radio broadcast software, and SMS extraction/export software. Get software here.